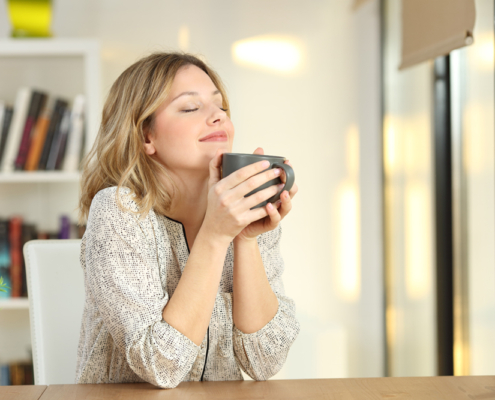 Most people I speak with believe that drinking coffee is harmful. As a registered dietitian nutritionist and certified coffee lover, I’m happy to dispel this myth. Recent studies suggest, quite to the contrary, that coffee may have health benefits.  “There is certainly much more good news than bad news, in terms of coffee and health,” says Frank Hu, MD, MPH, PhD, nutrition and epidemiology professor at the Harvard School of Public Health.

What is common knowledge is that coffee contains caffeine and caffeine is a stimulant, shown to increase energy levels and decrease fatigue.  Many people depend on their daily cup to wake up and to get their day started.  But there are many potential health benefits beyond its energizing effect. A growing body of research shows that coffee drinkers, compared to nondrinkers, may enjoy the following health benefits:

Recent studies found that coffee drinkers are less likely to die from some of the leading causes of death including coronary heart disease, stroke, and diabetes.

Including coffee in an individualized diet plan can help decrease the risk of developing type 2 diabetes. “The vast majority of those studies have shown a benefit of coffee on the prevention of diabetes. And now there is also evidence that decaffeinated coffee may have the same benefit as regular coffee,” Hu tells WebMD.

If a weakened heart has difficulty pumping blood to the body, coffee in moderation, one to two cups a day,  may diminish the risk of heart failure.

Not only is caffeine associated with a reduced risk of developing Parkinson’s disease, but it may also help those with the condition better control their movements.

“For Parkinson’s disease, the data have always been very consistent: higher consumption of coffee is associated with decreased risk of Parkinson’s,” Hu tells WebMD. “That seems to be due to caffeine, though exactly how that works isn’t clear,” Hu notes.

Coffee has also been linked to lower risk of dementia, including Alzheimer’s disease. A 2009 study from Finland and Sweden showed that, out of 1,400 people followed for about 20 years, those who reported drinking 3-5 cups of coffee daily were 65% less likely to develop dementia and Alzheimer’s disease, compared with nondrinkers or occasional coffee drinkers.

The incidence is lower.

Recent research shows that people who drink coffee are more likely to have normal levels of liver enzymes.   Both regular and decaf coffee appear to protect your liver.

The research has not only found that there is no association with risk, but there are actually beneficial effects such as improved antioxidant responses and reduced inflammation.

Evidence from the American Institute for Cancer Research concludes that drinking coffee may reduce the risk for endometrial and liver cancer.  Furthermore, researchers found that coffee drinkers — decaf or regular — were 26 percent less likely to develop colorectal cancer.

Based on a systematic review of a large body of research, it is not a risk for the cancers that were studied.

Dark roast coffee has been found to decrease breakage in DNA strands. These breakages, which occur in nature naturally, can contribute to tumors or cancer if not repaired.

A word of caution, coffee still has potential risks, mostly due to its high caffeine content, and is associated with increases in several cardiovascular disease risk factors, including blood pressure and plasma homocysteine. Women who are pregnant, trying to become pregnant or breastfeeding need to be cautious about caffeine. And of course, if you have side effects from coffee, such as heartburn, nervousness, or insomnia, you need to cut back on your daily intake.

Be aware that boiled, unfiltered coffee has been associated with mild increase in cholesterol levels.

The bottom line – For adults consuming moderate amounts of coffee (3-4 cups/day, providing 300-400 mg of caffeine), your coffee habit is probably fine:    more likely to benefit health than cause harm.

Read more about the health benefits of coffee here:

Coffee and health: a review of recent human research